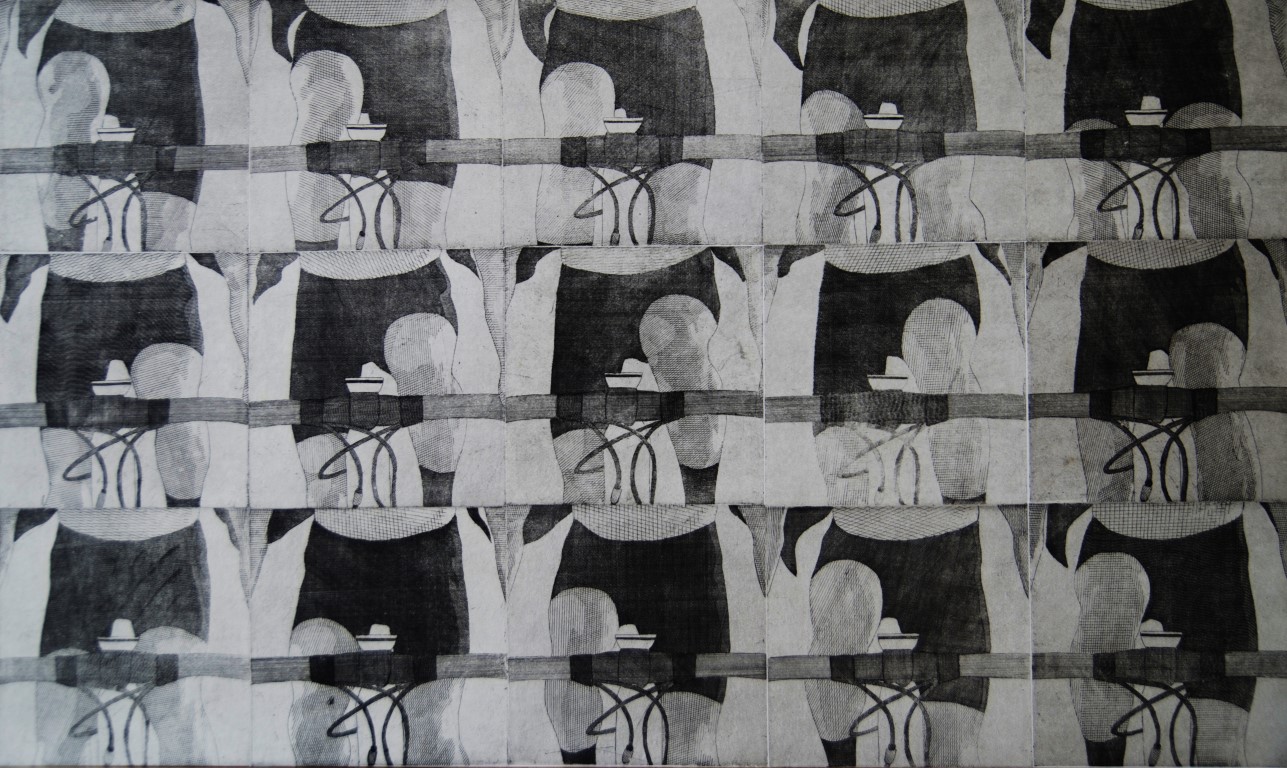 To start off 2019, Atelier Circulaire presents an exhibition by emerging artist Philippe Mainguy, from January 17 to February 16. Entitled Franchir la ligne (Crossing the line), the exhibition is the culmination of four years of research during which the artist has explored intaglio through a series of portraits, a reflexion on movement and the involvement of the body in his own work.

Philippe Mainguy’s work should be approached via the notion of repetition. Among its numerous meanings, it is simultaneously the act of reproducing something several times and the reiteration of a same action. As Jacques Derrida says in Papier Machine : " novelty arises, willingly or not, from multiplied iterations" (" L’inédit surgit, qu’on le veuille ou non, dans la multiplicité des répétitions[1]"). Inherent in the practice of printed arts, the concept of repetition takes on a new dimension in the all-digital era. We now live with an overabundance of infinitely reproducible images, where the pixel has replaced the line and where the instant has become the new time unit. This outlines the context in which Philippe Mainguy’s artistic approach should be appreciated, as he draws from digital images produced with a click and immediately disseminated, and converts them through the long and work-intensive process of intaglio printmaking.

The portrait genre, considerably transformed with the advent of social media, constitutes an essential working ground for Philippe Mainguy. To reproduce photographs of acquaintances posted on Facebook or Instagram, he uses the traditional etching process, thus creating an intentional anachronism. Even though the chosen formats, poses and gazes of the subjects comply with the codes usually applied to these postings, the meticulous hatchings, the texture work and the suppression of colors confer a physicality to images intended to remain in the digital domain. The artist synthetizes a form and consolidates it in a motif. In doing so, he introduces a singularity in the repetition of the image and sets a distance with the subject.

Repetition is not only an approach to a subject in Philippe Mainguy’s work, but a true physical commitment on the part of the artist in the practice of intaglio. In the animation Portrait d’un cycliste, Philippe Mainguy bonds the cyclical and repetitive movements of the artist’s body when operating the press to those of a cyclist pedaling on his bike. A passionate cyclist himself, he could quote cyclist and author Olivier Haralambon in saying : " Pedalling is making sense, no more, but no less. It’s inhabiting, in a privileged way, this space within where images emerge" ("Pédaler, c’est faire sens, rien de plus, mais rien de moins. C’est habiter sur un mode privilégié ce lieu en nous où se lèvent les images" [2]). The automatic motions leading to an objective, the circular movements imposed on the body by a machine, the physical effort of the back bending or the head leaning for hours on end, the pressure of the foot on the pedal or of the hand on the burin, the rhythm in the sound of the chain engaging the gear or of the burin chafing the ruler, are recurring elements that lead the artist in a state of meditative endurance. Immersion in such a state activates the imagination, giving birth to ideas, which merge and coalesce towards a result. Repetition thus becomes a means to play out the duration of the creative process. The copper plates on display attest to the time and the extent of the work invested to realize the animation.

Philippe Mainguy uses repetition, on the one hand, to reproduce, deconstruct and restructure his subject and, on the other hand, to iterate a series of actions which change the production time of an image.  Through those two strategies, the artist endeavors to make repetition a difference in itself.  Therein lies the role of imagination which, according to Gilles Deleuze, serves to "extract from repetition something new, the difference"(" soutirer à la répétition quelque chose de nouveau, lui soutirer la différence"[3]). This process allows the artist to cross the line, thus Franchir la ligne. In other words, in sport as in etching, to surpass one’s limits to achieve satisfaction and pleasure.