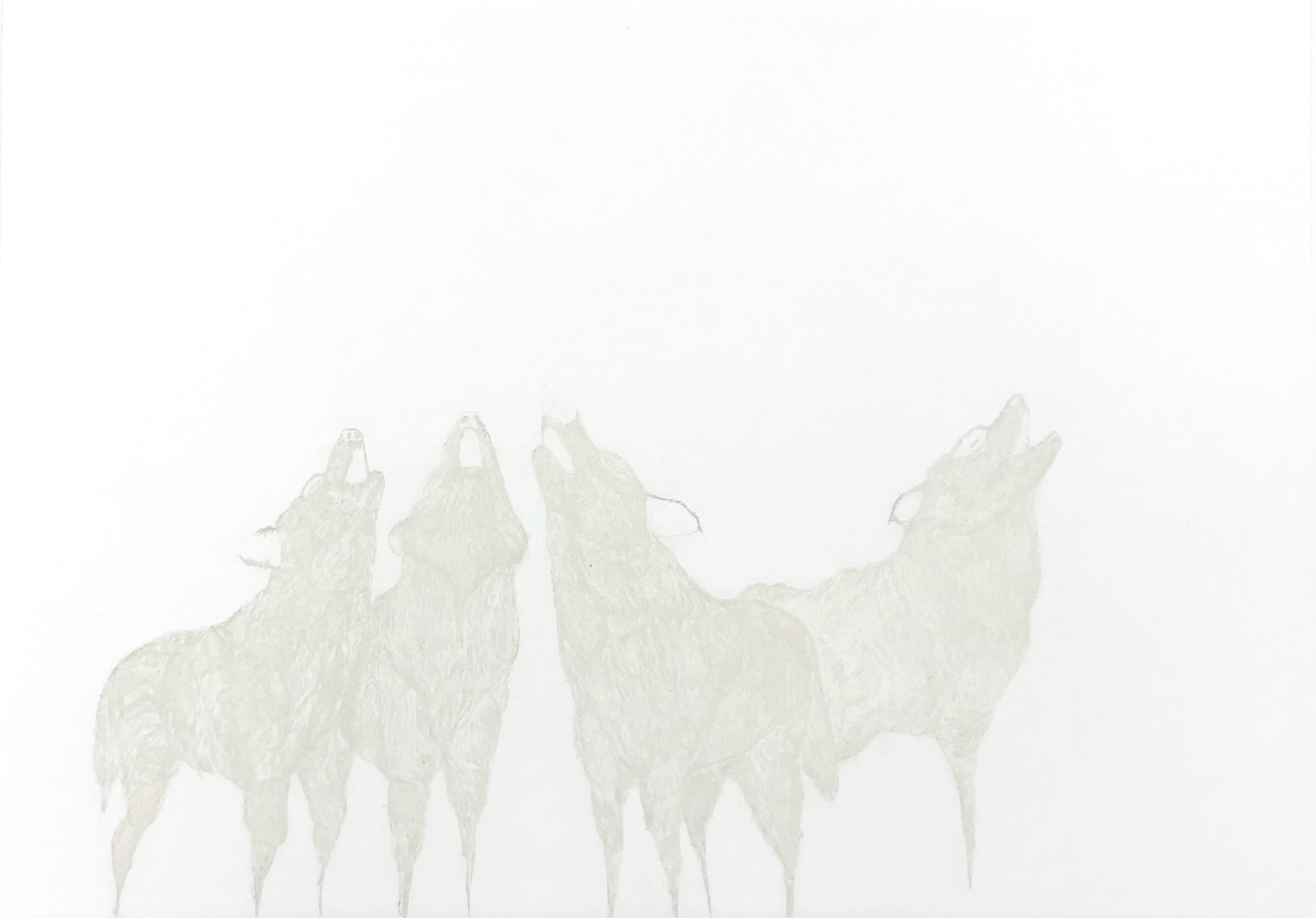 Side Effects is an installation by Shabnam Zeraati composed of two bodies of works examining the migratory impact due to climate change. In a kind of pure and disturbing white mirage, the artist puts in parallel two terrible realities linked to the same worldwide phenomenon: the extinction of animal species and the displacement of human populations.

The first corpus brings together 26 prints of endangered local animal species. Worked in white ink or embossing on white paper, each of them presents the portrait of an animal that seems to fade away through a tone-on-tone effect. The whole forms a zoological atlas whose pages are erased over time. Pushing the monochrome aspect to a certain optical discomfort, the artist forces the viewer’s eye to reconstruct these images like old memories. In this way, she translates a general amnesia towards the condition of wild animals at risk of extinction. Shabnam Zeraati thus plunges us into a near future, already clearly perceptible, in which the shift away from our responsibilities is the greatest threat.

This omission force is expressed in a different way in the second corpus, made up of plaster moulding of hands placed on the ground, fingers pointing towards the sky. These outstretched hands, like cries for help, condense the stereotypes used in media representations of migratory movements over the past decade, and in particular the treatment of the Syrian refugee crisis. The latter partly originates from the poor management of water by the authorities following several years of draught. As a result, the work brings us to another reality of global warming: climate refugees. The artist approaches this subject with an empathy by using a collective creation process. Indeed, these sculptures are the result of mediation workshops led by the artist in the Centre-du-Québec region to link families of newcomers (including many of Syrian origin) with Quebec families. Each hand, whose palm lines and fingerprints are visible, act as a striking and tangible portrait, materializing a phenomenon that affects us all closely.

Just by the subtle interweaving of some clues that have become almost invisible, Shabnam Zeraati stresses that the global impacts of climate change have actually local consequences. Side Effects thus uses erasure to confront our tendency to put aside what we do not want to see and reveals - by subtraction - a whole series of causalities.

A native of Iran, Shabnam Zeraati has been based in Montreal since 2011. The artist, who pays close attention to the drawing and the possibilities of the printed medium by crossing different techniques (screen printing, engraving, molding), had her work shown in several exhibitions in Quebec, especially at MAI (Montreal), Maison de la culture (Longueuil), Musée historique du Madawaska, Atoll art center (Victoriaville) and Articule (Montreal).