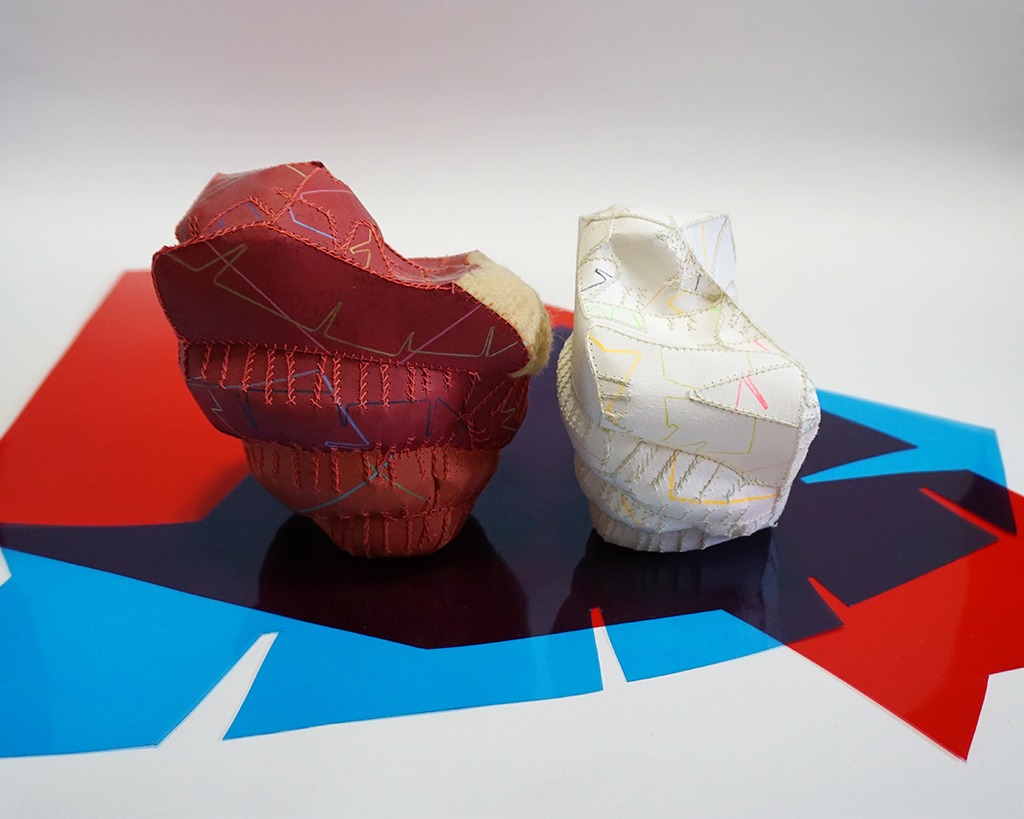 Presented in a plentiful installation, Feedback Loop brings together two bodies of works by Neah Kelly and Mark Laurin. The two artists, based in Hamilton, Ontario, work in a broad field of printed arts techniques and share the same creative process based on the act of abstraction. Their goal is not to reach a level of pure formality, but rather to establish the rules of a riddle in which the spectator has a veritable role of investigator.

Entering the Feedback Loop exhibition is like rushing into a colourful chaos. Our eye is trying to find the point of reference, to assemble the pieces, to recreate the steps. However, any aesthetic theory is useless to read this work.  Skilled printers will also have difficulty defining this installation. No dominant printing technique, here we find lithography, screen printing, digital printing and intaglio. Sometimes, knowledge is useless when we look at art, only our sensitivity and imagination can open our eyes.

What clues do the artists give us? Through a process of formal extraction, they simplify, schematize, reduce to recompose according to their good will. However, both artists give us a key, a point of origin that allows us to find a layout of different pieces: a unit of representation. It allows us some brain work to reconstruct an image.

Neah Kelly uses three irregular shapes as a unit of representation. Whether on paper or composing an object in volume, they generate colour, space and materiality. These figures create three glyphs of a formal vocabulary that is available via multiple techniques (intaglio, lithography, screen printing) on ​​a variety of media (papers, books, plexiglas). In a self-referential approach, these forms have no particular meaning, but react to each other, evolve in different contexts and unfold in several dimensional spaces.

For Mark Laurin, the simplest common denominator is a line. In opposition with Kelly’s work, the line refers to antique intaglio prints notably from planispheres or landscapes. These famous parallel lines, airy sea or the sky are here subdivided, redisposed and printed in screen printing, creating a confusion between the two techniques. By analyzing these abstract compositions, our brain gathers the lines and recomposes landscapes more or less distant from what they have already been.

These index constructions trigger our mechanisms of interpretation and our capacity to make sense. But no matter what we see in these combinations of shapes or lines, artists do not try to absolutely show an image or result, but rather a creative process. This consists of the successive deconstruction of formal elements and their recontextualization in a new environment. This act of abstraction is largely intuitive, but it is constrained by certain principles imposed by the artists or by the parameters of the printing technique in which this operation takes place: for example the transfer of the engraved lines of intaglio on the surface of the screen print by Mark Laurin, or the adaptation of the lithographic design on the CNC cutting of Plexiglas by Neah Kelly.

Moving from one technique to another, sometimes from one dimension to another, we are witnessing the shift of these units of representation towards a new framework in which the rules are different. During this displacement, the characteristics of the line or of the form are preserved, obeying to a certain extent the geometrical laws of the translation. In other words, the artists operate what is commonly known in computer as a "drag and drop". It is by repeating this process many times that a back and forth is created between the pieces of works presented in this installation. Taken as a whole, this collaborative work thus forms a feedback loop, that is to say a series of causes and effects whose origins and results are unknown, but which create a dynamic liminal space, an organized mess that is favorable to stimulate our imagination and appeal to our experience.