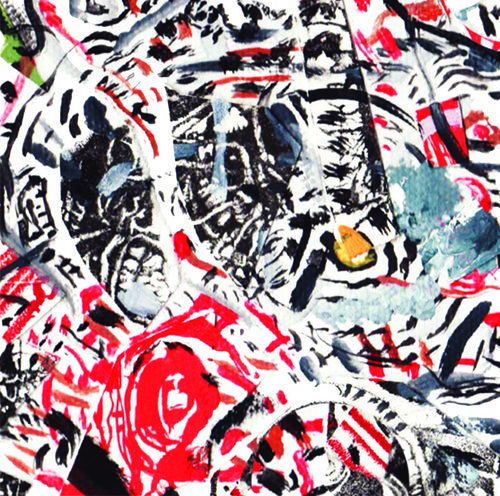 With "Surfaces", Daniel Sylvestre presents a work of stone lithographs realized in 2017. From small formats to large murals, his works form an explosive universe, crossed by color, borrowing a complex and free graphic vocabulary. Lithographic elements torn in multiple plots become the material of a series of oil paintings.

"Surfaces" is a set of abstract works of a strong presence and without narration. The artist himself describes his approach as "free, cheerful and aggressive", guided by "the wild thoughts that inhabit us". His work appears as an echo of American abstract expressionism.

Daniel Sylvestre has been practicing stone lithography for nearly twenty years at Atelier Circulaire. His engraving work was recognized during his participation in the Biennial of contemporary print of Trois-Rivières and numerous group and solo exhibitions.

A versatile artist, he won the Governor General's Award in 2010 for the poetry collection "Rose, derrière le rideau de la folie". He is the author of the blog "Carnets libres" from which were taken drawings and texts for the realization of two books published by La Mèche "Fous, folles" in 2012 and the dystopia "Le compteur intelligent" in 2013.