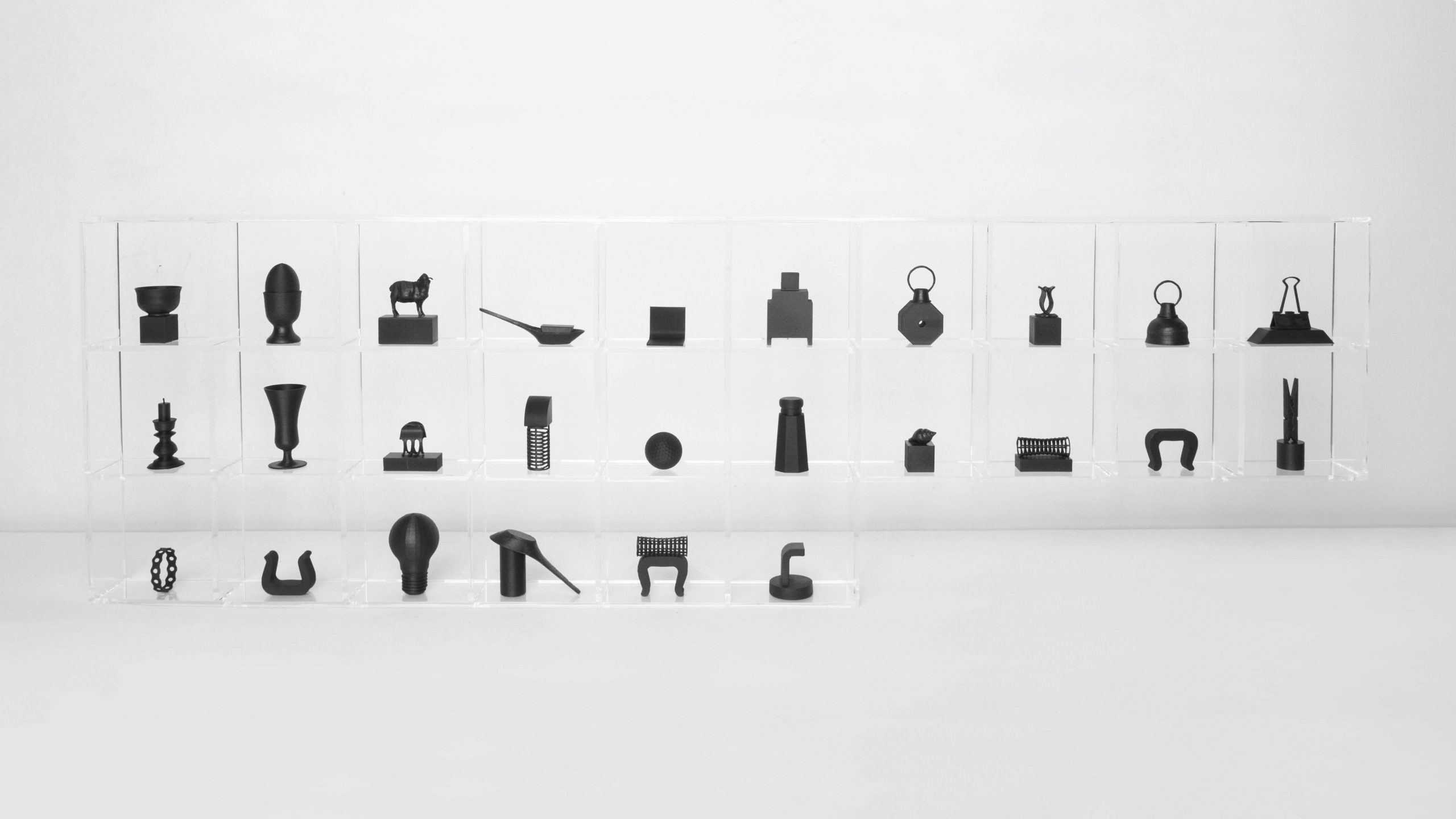 Originally designed as a tool for bookkeeping notations, writing as a system was invented in Mesopotamia in the fourth millennium BCE to keep track of inventories, record transactions, and register property titles. While it took on different uses during Antiquity, writing, as it developed through the ages, was intrinsically linked to the accumulation of material wealth and the affirmation of a social hierarchy.

Taking this observation as her starting point, artist Clara Cousineau aims to reconnect writing with its earliest function by using objects as raw materials for the written. The exhibition Objectifier l’écriture presents a group of works that explore how writing and objects are connected using an approach midway between semiotic and aesthetic. In an installation resembling a residential interior, Cousineau lays out, as a typographer would, an inventory of object-letters through a variety of media and techniques, offering her formal research and sociological reflection on the idea of writing.

The work that lends its title to that of the exhibition, presented in a showcase, is the point of departure for Cousineau’s research on the subject. She displays various objects related to the domestic space; painted black, they are assembled sequentially and placed on shelves with blue-painted edges that are linked by a vertical red line. From these simple visual clues, our eye quickly understands that these objects are acting as a series of logograms on a page. This transposition into volumes of what we usually analyze through a two-dimensional lens makes us aware of the logic behind writing: the association of visual symbols in a linear structure, the search for meaning through segmentation, the support as physical frame for the written.

In her plan to build this new textual language, Cousineau took her reasoning further by designing a system of graphemes using these objects. Twenty-six object-letters were modelled digitally and reproduced through 3D printing. They are presented at the entrance as a collection of bibelots in Police de caractères: Objet and are subject to typographic variations in objet | objet | objet. In the latter work, the word “objet” was printed in three variations: in regular characters highlighted, in italics, and in boldface. Creating confusion between signifier and signified, Cousineau here emphasizes a self-referential mechanism that makes the link between the written and the object.

Both formal play and communicational interplay, the letters are repeated, multiplied, and transformed depending on their support. They also propose various socio-historical readings related to the use of writing. In Mise en relief A - Z, produced in collaboration with the graphic designer Allen’s Cruz, they are printed in relief on matrixes more than a century old that were used to print the newspapers Le Soleil and L’Événement. The matrixes were found by chance within the walls of a house while it was being renovated. Placed in the gallery like wallpaper, they evoke the omnipotence of the twentieth-century printed press, a mass medium that revolutionized our relationship with writing and greatly contributed to the dissemination of a patriarchal model. The object-letters, printed individually and in large format, superimpose a feminine imagery and perform as acts of empowerment. This approach is reminiscent of certain of Annette Messager’s album-collections, in which Messager annotated, recopied, and drew on articles from the tabloid press and advertising images in order to ridicule the feminine archetypes that they conveyed.

S’asseoir sur la marge, another collaboration with Allen’s Cruz, shows how use of digital media alters our perception, both cognitive and corporeal, of writing. This relational work invites two people to enter into an installation containing a white table and two attached red chairs, the grouping taking on the visual codes of a page. An arrangement composed of two screens and two keyboards permits the public to use Cousineau’s font in a chat through an instant-communications device. Both reflection on digital writing and behavioural experience for visitors, this installation occupies a central place in the exhibition by playing on the context in which this typography is deployed.

Here, the page is both frame and content. It opens to new horizons with Fenêtre narrative and is a tool for memory accumulation in Une image, mille pages. It is, to use Gérard Blanchard’s expression,[1] the site of the text. Whether it is in clay, paper, pixels, or volumes, it determines both the spatial and the temporal contexts of writing. In Blanchard’s view, typography is an undertaking of domestication of writing, which, with its system of codes, comes to embody the spirit of a culture and an epoch.

Thus, Cousineau uses typographic rules not solely in a purely conceptual approach to writing, but also to challenge the patterns that govern how we comprehend the world. The domestic environment, in which these object-letters come to life, itself acts as a page within which a group of laws are applied to determine social behaviour. Cousineau thus creates a layout of everyday life. She changes the context of objects, strips them of their meaning in order to bring the latent aspects of society to light: standardized comfort, the desire to possess lots of things, too much communication.

Rather than fetishizing writing, Objectifier l’écriture proposes writing unencumbered of its meaning to reveal the fertility of the ordinary, what Kenneth Goldsmith[2] calls “uncreative writing.” Repetition, copying, transposition, and manipulation are strategies that Cousineau borrows from the world of printmaking to convey the poetry of normalized daily life.

Clara Cousineau is an artist whose work is embodied in a plurality of mediums. In a constant back and forth between 2D and 3D, she explores the domestic environment and the symbolic charge of the objects that inhabit it. She received her BFA with a specialization in sculpture from Concordia University in 2018. That same year, she won the national award in the BMO 1st Art! Her work has been shown at Justina M. Barnicke Gallery (Toronto), General Hardware Contemporary Gallery (Toronto), Art Mûr Gallery and FOFA Gallery (Montreal), as well as in several group exhibitions. Clara Cousineau is originally from Quebec City and lives and works in Montreal.