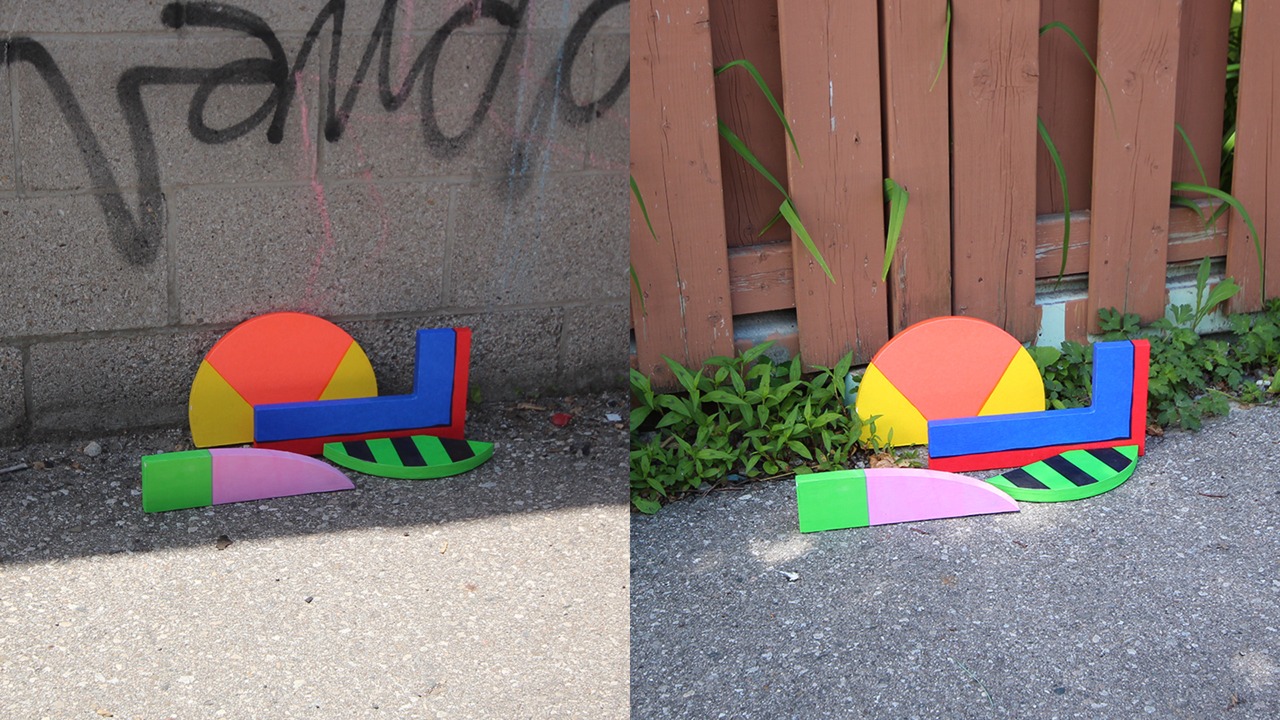 Philippe Blanchard is a multidisciplinary artist whose work combines screen printing, animation and art installation. He uses these techniques’ specific features to alter our perception of time and space, exploring such concepts as repetition, transfer and translation to create a composite artwork set between image and object.

The Brouillages / Interference Patterns installation combines a group of wooden objects covered in printed paper and arranged on the ground, a double animation projected onto the gallery wall and a set of six curtains of printed textile. Each of these components takes the shape of or displays geometric patterns which mix with, adapt to or alter each other depending on their format. This systemic artwork, in which each part supports the other, comes to life through a constant friction between craft and new technologies, between intuition and intent, between the physical object and its digital representation.

The first stage in the production of this artwork involves the creation of these plywood objects which are geometrically standard in shape, yet roughly finished. Even though each piece is unique, they were produced through vectorization software and cut using a CNC machine. They were then wrapped in paper which had been screen color-printed using a stencil system. This printed wrapping reveals inking variations and traces of folding or glueing, giving a hand-made quality to a digitally created form. The ground layout of these objects was done instinctively, in such a way that the interplay between colors and shapes would generate an abstract composition with a childish aspect evocative of a disassembled sculpture by Bauhaus artist Alma Siedoff-Buscher.

The double animation, filmed in stop motion, documents the exciting life of these objects interacting with each other and with their environment. The video projection on the left shows an improvised choreography of objects. The right projection shows the choreography rehearsed in a different context, either in the familiar context of a back alley or in the gallery setting. As the movement sequence is repeated, it is shifted as it adapts to another setting. This is where the intuition versus intent tension plays out the most: this desynchronization breaks the simultaneity of the two projections. And, by doing so, it demonstrates the impossibility of identically reproducing something in two different times and spaces. The repetition, as a sum of the differences, is thus a strategy to introduce a chronology of events, a temporality in the object’s representation.

The digital images originating from the animation in turn play a role in the third stage of the process, when they are transfered to the curtains. They were digitally printed using screen captures that were rearranged and adapted to the textile surface. Fragments of the original geometric shapes are recognizable, even though transfer from one dimensional space to another has considerably altered their appearance. To a certain extent, the curtains serve as a gangue for the artwork, barely veiling it from the eyes of passersby outside the gallery, and displaying a vague transcript of the original geometric forms.

These abstract shapes thus transit from one medium to another, affecting all display areas. They act as signs translating into different patterns, colors and sizes. They constitute a language whose code has been lost, in which the distinction between signifier and signified has become blurred. Their repetition is reassuring, their transfer is unsettling. Even though the source of one of these geometric forms may be found, the hierarchy of their representation cannot be established as all parts of the artwork are too interdependent. Captures, exports and dimensional displacements add to the confusion of our understanding of what is the original and what is the copy, thus further merging the object with its infinitely reproduced image. It is the loss of aura of the art object as famously described by Walter Benjamin.

Brouillages / Interference Patterns finds its meaning in a fluid zone where the concepts of object and image meet. At times, the artist uses a printed object to create a digital image, at other times he gives a tangibility to the image by digitally printing it on an object. He thus renders the object and its image inseparable, creating what Artie Vierkant has called an image-object. In this process, Philippe Blanchard adapts the modus operandi of the post-Internet movement to the printed realm : he develops a novel physical relation between objects and images, taking into account their physicality, their presentation mode and their dissemination in the digital era. In this context where image-objects may be infinitely reproduced, modified without limit and rematerialized in any form, this artwork aura might cease to exist. Or, subservient to these infinite variations, without a point of reference, without origin, it might become the flux between these multiple instantiations which have been programmed, willingly or not by the artist, to include blurs and interferences in their code.